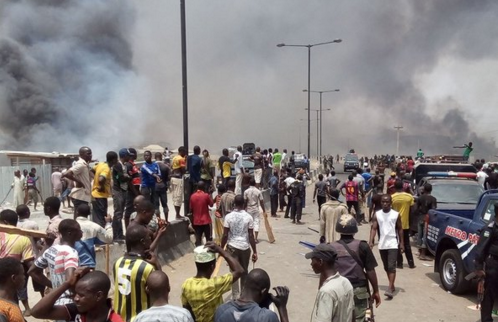 Sixteen years after Nigeria returned to democratic rule, interethnic tensions appear to be deepening, marked by episodic incidents of violent conflict. These have taken place in both rural and urban locales (often between those considering themselves indigenes versus “settlers” who they consider as “outsiders) across the country. No urban area in Nigeria appears to be immune from ethnic tension and conflict, including Lagos, its economic hub. Since 1999, the Yoruba ethnic militia group, the Odua People’s Congress (OPC), has been at the forefront of the drive to ensure Yoruba people, as autochthons—that is, aboriginal inhabitants—of Lagos, control all local markets and other commercial spaces. The latest episode in interethnic conflict that flared up on March 2016, echoes earlier incidents between the Yoruba and Hausa in Idi-Araba in 2002, and well Mile 12 in November 1999. The earlier clashes can be termed as examples of “functional conflict,” as they were followed by a period of relatively peaceful coexistence.
The Mile 12 international market is located in the Ikosi-Isheri Local Council Development Area (LCDA) of Lagos state, in Southwest Nigeria. Traders come from different parts of the country and neighboring countries, but the Yoruba (from Southwest Nigeria) and the Hausa (from Northern Nigeria) are the dominant ethnic groups. The latest clash in the market was the spillover effect of a conflict in the Mile 12 neighborhood between “Area Boys” (street urchins), most of whom are Yoruba, and Okada operators (motorcycle taxis), most of whom are Hausa. The latter have increased in number with rising urban unemployment and the high influx of people displaced by the Boko Haram conflict in northeast Nigeria, who are drawn to Lagos by the profitability of “hustling” in the megacity.
The incident reportedly began on Wednesday, March 2, when a Hausa Okada operator was attacked for hitting a pregnant Yoruba woman with his motorcycle while driving against the traffic and refusing to take the woman to the hospital for treatment. According to one account, the Okada operator, who neither spoke or understood the Yoruba nor English language, stabbed one of the people who wanted him to take responsibility for the treatment of the woman, which led to brawl. In apparent retaliation, however, the Hausa later attacked a Yoruba Okada operator who committed a similar offense. By that evening, the clash had degenerated and spread, as the Area Boys –Yoruba, allegedly attacked Hausa residents and traders in the Mile 12 market. By Thursday morning, the conflict escalated as the Hausa mobilized to avenge the death of their kinsmen, but the Yoruba pushed them back. The situation was defused when the police and some soldiers arrived at the scene.
It is important to note that the latest episode of violence at the Mile 12 market was precipitated by “outsiders”—or Area Boys, that is, non-actors within the market. The involvement of such outsiders in conflicts between the Hausa and Yoruba in Mile 12 dates back to the 1999 episode, when members of the OPC were allegedly mobilized to fight on the side of the Yoruba. The 2016 episode however involved Okada operators and Area Boys from the two ethnic groups. Another source of concern in the conflict was the alleged partisanship demonstrated by the security forces deployed to stop the violence, maintain order and restore normalcy to the market.
The duration of peaceful coexistence sustained in the market itself by the two main ethnic nationalities since 1999 indicates their peacemaking ingenuity and capacity to sustain peaceful co-existence. However, the relapse into another episode of conflict in Mile 12 is a cause for concern.
Apart from drawing attention to seething subterranean tensions linked to citizenship claims, and the fragility of peace in ethnically diverse urban settings, the latest conflict points to the susceptibility of communities to the actions of angry marginalized street boys in African cities. Therefore, actions and policies aimed at promoting peaceful co-existence and tolerance need to be socially inclusive, economically empowering and inclusive of vulnerable groups in urban settings.

Gbemisola Animasawun holds a PhD and MA in peace and conflict studies from the University of Ibadan, Nigeria, and a BA in Russian language from the University of Lagos, Nigeria. He has been teaching at the Center for Peace and Strategic Studies, University of Ilorin, Nigeria, since 2011. His research interests include peace processes, autochthony and fault line conflicts, human security, neopatrimonialism, interfaith relations, radical Islamism, and protests. He is a recipient of an APN residential postdoctoral fellowship (2014).