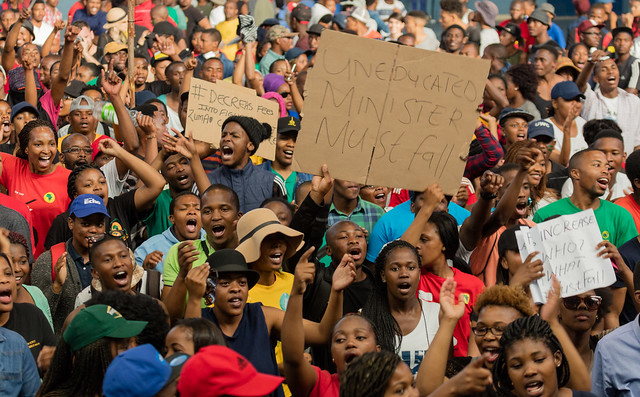 In October 2015, South African students took to the streets for weeks of protests under the slogan #FeesMustFall. The magnitude of the protests compelled all higher education institutions in the country to suspend educational activities, including tests and examinations. These events represented a bid to find a panacea to the looming cataclysm of increasing tuition fees. The overwhelming concern expressed in the students’ chanting and demands was the extent to which many of those from poor households and underpaid middle class families would become educationally disenfranchised by the increases. In a country riddled with corruption, the quality of higher education was already threatened, and should the current fees climb by 10 to 12 per cent, access to it would plummet.[1] To address the crisis, the student movements effectively organized collective and simultaneous demonstrations. They also took advantage of the ubiquitous presence of the Internet, posting their messages incessantly on social media to attract global awareness to their plight.

The reality of the effect the fee increment would have on the educational pursuits of many youth in South Africa created a space for situational leadership among the students, and no time was wasted by the youth in representing their own agency. Streaming out in thousands were students from public universities such as Rhodes University (RU), University of Cape Town (UCT), University of Pretoria (UP), University of Witwatersrand (Wits), and University of South Africa (UNISA). Many international students were also filled with trepidation that the fee hike would affect them, leading many of them to participate in the protests.

The demonstrations were not just about the impending tuition increase, however. In addition to its rescinding, the students sought the democratization of the educational system, with free and high-quality higher education made equally accessible to all South Africans. Despite promises to that effect made by the African National Congress (ANC) government, only 0.75 percent of the fiscal budget had been going into education.[2]

The students did attain their primary objective to be heard in spite of police brutality and highly exaggerated reports of students’ unprecedented acts of violence and disruptions.[3]  Eventually, the daily protests elicited an announcement by President Jacob Zuma that there would be no increase in tuition fees.

Notably, the students were not alone in their #FeesMustFall quests, as their audacity and determination provoked compelling responses from thousands of lecturers who rose in their support[4]—a reprise of the striking synergy that had been demonstrated between the students and the staff of the University of Cape Town (UCT) in the #RhodesMustFall campaign earlier in the year. The protests also naturally brought back into focus other troubling issues in the academic sector, such as the domination of important academic positions by white males and the exorbitant administrative expenses of many universities. The engineering by students of these largest of the post-apartheid protests brought to light the power and relevance of youth agency in a country still ensnared in a labyrinth of socio-political and economic difficulties.

Two decades since the end of apartheid, South Africa has not been able to overcome its topmost challenges. The country faces unprecedented levels of inequality, poverty, unemployment, and structural racism,[5] with conditions continuing to nose dive. The grown-free[6] and born-free[7] generations, among whom are most students in universities today, seem not to have experienced the freedom promised by a post-1994 system that is not protecting or supporting them or providing for their needs. Their convergence in spite of colour, race, gender, and age at this point in the history of the rainbow nation is critical.

The preceding #RhodesMustFall movement, the progenitor of the social injustice “MustFall” campaigns in South Africa, was fundamental to these efforts. Started in March 2015 by a group of UCT students and staff members who mobilized against institutionalized racism,[8] the movement conducted a well-strategized campaign of protests calling for the “decolonization” of education and racial transformation at UCT.[9] Through “Occupy UCT” actions, civil disobedience, and Internet activism, the movement succeeded in bringing about the removal of the 1934 statue of British imperialist Cecil Rhodes that had overlooked Cape Town from the mountainous UCT campus.

The fall of the Rhodes statue was only emblematic, however, of a call to end white supremacy and the culture of silence that permeates the social and academic fabric of UCT, which the #RhodesMustFall movement went on to address. By stirring deep but silent waters of opposition to repression, marginalization, and inequality, the campaign inspired the emergence of movements at many other universities. At Stellenbosch University in November 2015, for instance, the students protested for the elimination of Afrikaans as a language of instruction and won the right to be taught in English.[10] This rise of amalgamated student movements across South Africa culminated in more collaborative actions in the #FeesMustFall protests.

The #RhodesMustFall Movement remains unrelenting in its struggles to achieve academic decolonization and the abolition of white supremacy. The emergence of youth agency in South Africa in 2015 exemplifies how the youth of every nation hold up half the sky and deserve to contribute to their own governance. Now that the seed is sown and South African youth are demonstrating crucial leadership skills, will it germinate into more relentless civic engagement in South African political institutions? Will the youth further their combined effort to influence policies and laws in their favour? Will this engagement lead to more integration and less segregation among South African institutions and the people? Will this situational leadership end soon, or will there be more strategies and actions in the future to address South Africa’s overarching post-apartheid inequalities, xenophobia, partisan politics, and other maladies? Time will tell.

But what time has told so far is that South African youths recognize the power in their agency, and they do not hesitate to exercise it when their futures are at stake. The massive rise in South African youth agency in 2015 has now entered the public consciousness. The year is also on record as that in which South African youth displayed and sustained unprecedented leadership skills. Now that fees have fallen and reverted to previous levels, will they continue to nurture their agency and use it to demand sustainable peace and development? Time again will tell.

[6] This term was coined to describe those young children at the end of South Africa’s apartheid in 1994 who have now grown to be adults.

[7] This term is officially used in South Africa for the first post-apartheid generation, especially children born since 1994.

Toyin Ajao is a research associate and an alumna of the Africa Leadership Centre (ALC). She holds a PhD in Political Science from the University of Pretoria, South Africa, where she was also a lecturer of International Relations. Ajao is a former doctoral grantee of the Social Science Research Council (SSRC) (Next Generation Social Sciences in Africa), Andrew Melon Foundation and the ALC. Her scholarly foci include posthuman security, African peace mechanisms, cultures of peace, conflict transformation, social media activism, citizen journalism, visionary feminism, intersectionalism, and decolonialism.