Babafemi A. Badejo started his professional life at the University of Lagos (UNILAG), Lagos, Nigeria in 1977 and obtained his PhD in political science from the University of California, Los Angeles (UCLA) in 1982 after submitting a dissertation on the political economy of Pakistan. He subsequently obtained an LLB degree in Law from UNILAG and a certificate to practice law from the Council of Legal Education and the Nigerian Law School. Dr. Badejo became a certified legal practitioner in December 1990 and was appointed Professor by Chrisland University, Abeokuta, Nigeria, in March 2021. He served in various posts, including as Deputy Special Representative of the UN Secretary-General, at UN peace operations in Somalia, Kenya, Liberia, Guinea-Bissau, and Sudan for almost 24 years. He also served as an adviser to the President, Office of the Prime Minister of Bahrain from 2018-2020, as a member of the Bahraini delegation at the 73rd and 74th sessions of the UN General Assembly (UNGA). Badejo designed the framework for the operationalization of the African Union Humanitarian Agency (AUHA), consulted on UNECA’s studies on the Four-Pillar Interlinkages, and provided training at the United Nations Office of the Special Adviser on Africa (UNOSAA) on Quadruple Nexus and Sustainable Development Goals (SDGs). He was on the team that produced the UNDP’s Human Development Reports for 1993 and 1994 and was a consultant for the South African Human Development Report in April 1995. He has several publications, including Nigerians’ Views on National Turmoil: A Situational Quadruple Nexus Analysis.

An Approach to Sustainable Development: Understanding the Quadruple Nexus 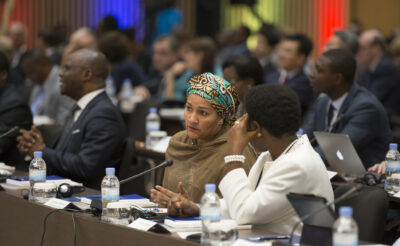 Maximizing the interlinkages of the pillars of peace/security, development, human rights, and humanitarianism while being fully cognizant of governance, external…