The African Peacebuilding Network (APN) of the Social Science Research Council (SSRC) is pleased to announce the 2019 recipients of its Individual Research Grants (IRG) and Book Manuscript Completion Grants (BMG).

The program awards these two unique grants to African researchers based in African universities, research institutes, and other policy-related and civil society institutions. Since 2013, the APN has supported the research of 144 scholars through 156 research grants.

The APN supports independent African research on conflict-affected countries and neighboring regions of the continent, as well as the integration of African knowledge into global policy communities. APN grants facilitate the production of high-quality African peacebuilding research and promotes its visibility among policy practitioners and scholars around the world, including Africa, with the aim of influencing academic discourse and effecting policy change.

The 15 recipients of the IRG listed below are pursuing a diverse range of topics related to conflict and peacebuilding in Africa, such as farmer-herder conflicts, the role of identity and gender in conflict, political violence, transitional justice, citizenship rights, and religion. The two recipients of the BMG are IRG alumni from 2018 and 2017 respectively, whose work will focus on peacebuilding, conflict, and migration. 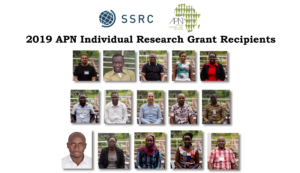 The Individual Research Grant (IRG) supports six-months of field-based research, through which recipients produce research-based knowledge that is relevant to and has a significant impact on peacebuilding scholarship, policy, and practice on the continent. The 2019 Individual Research Grant cohort features fifteen individuals from Uganda, Nigeria, Kenya, Morocco, Ghana, Rwanda, Sudan, Zimbabwe, and South Africa.

This year’s APN Individual Research Grant recipients are as follows: 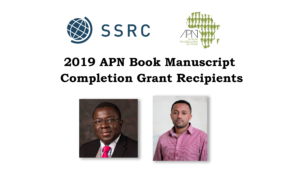 The APN also awards two Book Manuscript Completion Grants to APN Alumni annually. Book Manuscript Completion Grants (BMG) support APN Alumni to transform their APN projects or related peacebuilding research into publishable book manuscripts within a six-month timeframe. They also serve as a vehicle for enhancing the quality and visibility of independent African peacebuilding research both regionally and globally, while making the peacebuilding knowledge already gathered from a prior APN grant accessible to key policymakers and research centers of excellence in Africa and around the world. The 2019 BMG Cohort features two individuals from Cote d’Ivoire and Ethiopia.

This year’s Book Manuscript Completion Grant recipients are as follows:

Warm congratulations to this year’s African Peacebuilding Network grant recipients. The APN looks forward to working with you and seeing the results of your promising research.

If you are interested in applying for a grant from the African Peacebuilding Network, the next call for applications for the 2020 grant cycle will be released in October this year. Applications will be accepted from October 2019 through January 2020.

The African Peacebuilding Network program is funded by Carnegie Corporation of New York.

Launched in March 2012, the African Peacebuilding Network (APN) supports independent African research on conflict-affected countries and neighboring regions of the continent, as well as the integration of African knowledge into global policy communities.