Africa Peace Journalism: A Manual for Media Practitioners in East Africa is the outcome of the East Africa Regional Peace Journalism Training Workshop (March 2017) for journalists covering conflict and peacebuilding in East Africa. Organized by Rongo University’s Center for Media, Democracy, Peace, and Security (CMDPS) in partnership with the African Peacebuilding Network (APN) of the Social Science Research Council (SSRC), the two-day event brought together journalists from five East African countries—Kenya, Rwanda, South Sudan, Tanzania, and Uganda—to develop their capacity for reporting on conflict-related issues in an objective manner based on the tenets of the theory and practice of peace journalism.

Participants learned how to effectively use peace-promoting approaches, tools, and platforms for covering and reporting stories on conflict and peacebuilding. The workshop also facilitated discussions and networking between journalists and scholars from various East African countries working on peace and conflict at local, national, and regional levels.

This publication provides insights and knowledge aimed at strengthening the capacity of media practitioners for improved and ethically-sound coverage of conflict and peacebuilding in East Africa, with the goal of improving the prospects for peace and development. It is hoped that it will become a manual for those seeking to understand and imbibe the values of peace journalism and reflect them in their day-to-day activities and conflict reporting in ways that bring the fourth estate—journalism—into the mainstream of peacebuilding in East Africa. 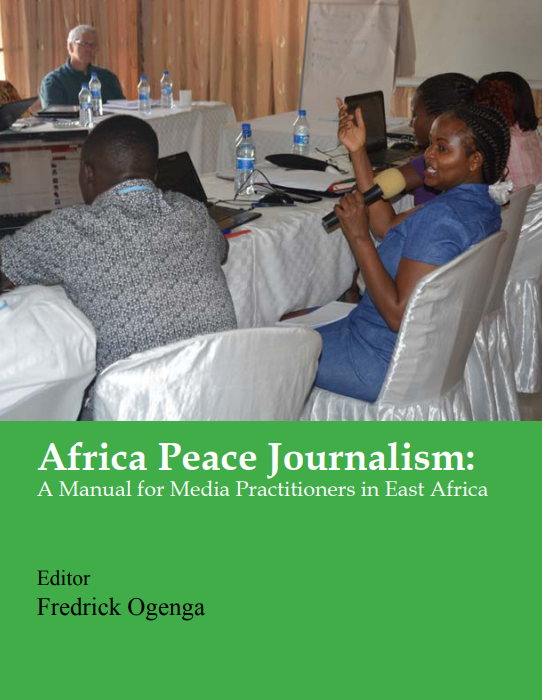 Chapter two by Gloria Laker explores the role of peace journalism in ending the Lord’s Resistance Army (LRA) insurgency in northern Uganda. Drawing upon her experience as a war reporter, Laker he provides a compelling case study about a radio station that helped end the LRA conflict by directly reaching out to enemy combatants and persuading them to surrender.

Duncan Omanga’s chapter about reporting on al Shabaab approaches the concept of terrorism as a form of political communication through public spectacle and warns of the dangers of inappropriate labels in news coverage and reportage. The chapter argues that emerging threats and new conflict trends require a rethinking of the methods of peace journalism.

Chapter four by Fredrick Ogenga begins with a conceptual overview of “Hybrid Peace Journalism (HPJ).” Ogenga explains how his unique approach to peace journalism combines elements from Africa and the West to improve conflict-sensitive reporting. Based on the core African values of Utu (humanity), Umoja (unity), and Harambee (pulling together), this approach also offers a counter-narrative to the sensationalized and largely negative news about Africa.

Chapter five, “Re-Situating Vernacular Media: A Tool for Peacebuilding among the Abakuria in Kenya,” by John Oluoch, examines the place of indigenous languages in rural media outlets. Focusing on the Abakuria community, Oluoch analyzes of the role of community-based radio stations in resolving inter- and intra-ethnic conflict.

Victor Bwire’s chapter, “Media and Peace in Kenya: Do Journalists Need Different Skills?” interrogates the crisis of credibility facing the Kenyan media. Bwire argues that the media has lost public trust due to its partisanship, bias, and poor ethical practices and that journalists need a greater awareness of their role and influence in society.

In chapter 7, Jacinta Mwende Maweu argues that the media’s subordination to the interests of political and economic elites prevents it from practicing a “peace and human rights approach” to journalism. Maweu claims that the media’s power is in its ability to set the news agenda and frame issues objectively. Such a role enables it to promote human rights by keeping the public informed and engaged. This, however, requires a credible and independent press committed to the truth.

Fredrick Oduor Ogenga is the head of department for Communication, Journalism and Media Studies at Rongo University College, Rongo, Kenya. He is also the found director of the Center for Media, Democracy, Peace and Security and chief executive officer of The Peacemaker Corps Foundation Kenya. Dr. Ogenga is a 2014 recipient of an African Peacebuilding Network Individual Research Grant.